Blockchain 101- Why is the Merge Causing Ethereum to Surge?

Blockchain 101- Why is the Merge Causing Ethereum to Surge? 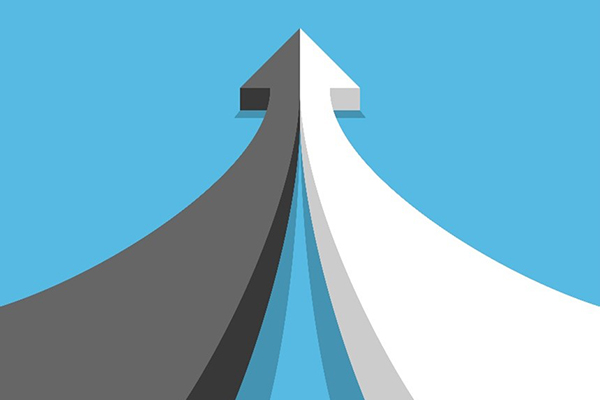 Cryptoland is close to adopting a new, more energy-efficient Ethereum platform, nicknamed “The Merge” because it involves the merging of the current proof-of-work Ethereum blockchain and the proof-of-stake “Beacon Chain” created by Ethereum developers.

Proof of work cryptocurrencies such as bitcoin is energy-intensive, involving fierce competition and powerful computing resources to verify transactions and keep the blockchain secure.  Bitcoin pioneered the proof-of-work model which requires a global, decentralized network of computers to solve complex mathematical puzzles to process transactions and earn rewards in the form of newly created bitcoins. The people and companies who set up these computers are called miners and the process is energy-intensive because the network requires miners to run their powerful machines 24/7.

Proof of stake, by contrast, allows users to participate in securing the network by putting their own crypto holdings on the line or staking them.  With proof of stake, the idea is that by locking up coins, stakeholders have a financial incentive to make sure transactions are valid. 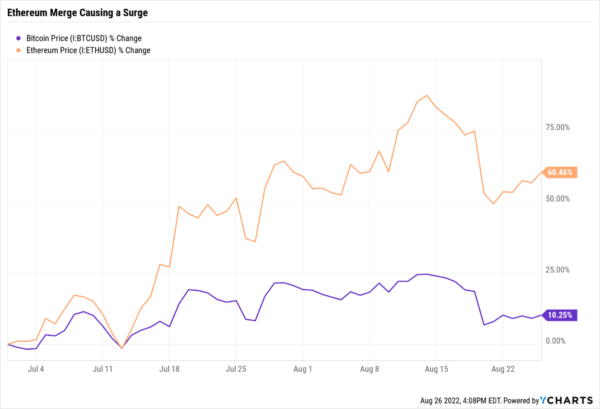 The Ethereum Foundation says the change is expected to reduce Ethereum’s electricity usage by about 99.95%, but a lot is riding on this upgrade beyond energy savings. Ether, the cryptocurrency that powers Ethereum has significantly outpaced Bitcoin recently based on the “buzz” surrounding the merge. Since July 1st, Ethereum is up more than 60%, while Bitcoin is only up a modest 10%.

Ethereum co-founder Vitalik Buterin said on Twitter that the upgrade should take place on or around Sept. 15, although he said the exact date is not guaranteed. The merge has been in the works for years and has been delayed several times for technical reasons.

The upgrade is a major technological undertaking given there are already thousands of decentralized applications with billions of dollars deposited in them running on the Ethereum blockchain.  Because there is so much value to be lost if there are any issues or flaws, this undertaking is not being taken lightly.  It involves a massive change to a large, operational network.  One crypto influencer, Swan Bitcoin’s Cory Klippsten, likes the merge to “trying to fix an airplane in mid-flight.”

The merge is probably the most complicated blockchain upgrade that has ever happened, so the amount of preparation work, testing, and security analysis are pretty significant.

The two largest stablecoin issuers, Tether and Circle, have both said they would support the proof-of-stake Ethereum blockchain.  But for miners who have invested in hardware to mine ether, the upgrade will hurt. There are many ether miners and mining pools that will immediately lose millions and millions of dollars of revenue when the merge happens. Many proof-of-work miners are preparing to migrate to the new Ethereum blockchain post-merge and become so-called validators. But there are “hold-out” miners that say they will continue to support the current Ethereum blockchain.

But most of the crypto world cannot wait for “The Merge” to happen to help it emerge from a long, cold Crypto Winter.